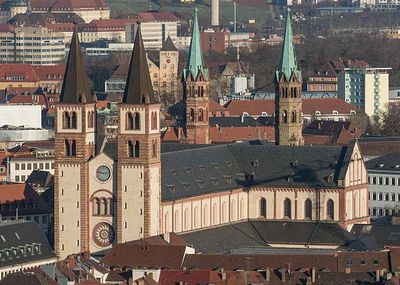 Würzburg Cathedral is a Roman Catholic cathedral in Würzburg in Bavaria, Germany, dedicated to Saint Kilian. It is the seat of the Bishop of Würzburg and has served as the burial place for the Prince-Bishops of Würzburg for hundreds of years. With an overall length of 103 metres it is the fourth largest Romanesque church building in Germany, and a masterpiece of German architecture from the Salian period. Notable later additions include work by Tilman Riemenschneider and Balthasar Neumann. The cathedral was heavily damaged by British bombs in March 1945 but rebuilt post-World War II.
The present cathedral was built from 1040 onwards by Bishop Bruno of Würzburgis. It likely was the third church on the site: the previous two, built in about 787 and 855, were respectively destroyed and severely damaged by fire. After Bruno's accidental death in 1045, his successor Adalbero completed the building in 1075. Due to several rebuildings, notably after 1133, the cathedral was only consecrated in 1187. This church already had the strong cross lay-out still present today: a long nave with a high choir, the broad transept and the two narrow western towers.