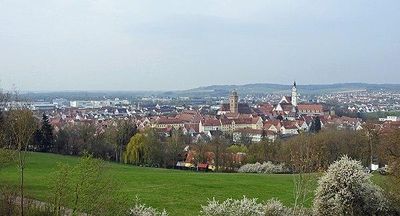 Donauwörth German: [ˌdoːnaʊˈvøːɐ̯t]) is a city and the capital of the Donau-Ries district in Swabia, Bavaria, Germany. It is said to have been founded by two fishermen where the Danube and Wörnitz rivers meet. The city is part of the scenic route called "Romantische Straße"
Donauwörth grew up in the course of the 11th and 12th centuries under the protection of the castle of Mangoldstein, became in the 13th century a seat of Duke Ludwig II of Bavaria, who, however, soon withdrew to Munich to escape from his wife, Duchess Maria of Brabant, whom he had there beheaded on an unfounded suspicion of infidelity. The town received the freedom of the Holy Roman Empire in 1308, and maintained its position in spite of the encroachments of Bavaria till 1607, when the interference of the Protestant inhabitants with the abbot of the Heilig-Kreuz called forth an imperial law authorizing the duke of Bavaria to punish them for the offence.