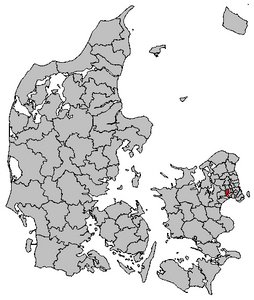 Albertslund Municipality is a municipality in Region Hovedstaden on the island of Zealand in eastern Denmark. The municipality covers an area of 23,04 km², and has a population of 27,780 . Its mayor is Steen Christiansen, a member of the Social Democrats political party. As of 2010 the social democrats have 9 of the 21 seats in the city council.
The main town and the site of its municipal council is the town of Albertslund. The original name of the municipality was Herstedernes Kommune. In 1973 the name was changed to Albertslund Kommune. The name Herstederne represents the two communities of Herstedvester and Herstedøster which were the original villages in the area together with Vridsløse and Risby.