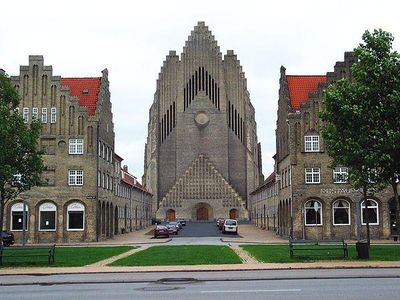 Grundtvig's Church is located in the Bispebjerg district of Copenhagen, Denmark. It is a rare example of expressionist church architecture. Due to its unusual appearance, it is one of the best known churches in the city.

The commission for the construction of a church to be named after the Danish philosopher and hymn writer N. F. S. Grundtvig was decided through a competition, won by Peder Vilhelm Jensen-Klint in 1913. The foundation of the new church was only laid after World War I, on 8 September 1921, Grundtvig's birthday. Building took place mainly from 1921 to 1926 when the tower section was completed, leading to the initial inauguration of the so-called Tower Church in 1927. Further work on the interior and on adjacent buildings continued until 1940 and was completed by Klint's son Kaare Klint after his father's death in 1930. The church stands at the centre of a residential development , also in yellow brick, designed by Jensen-Klint in harmony with the church.