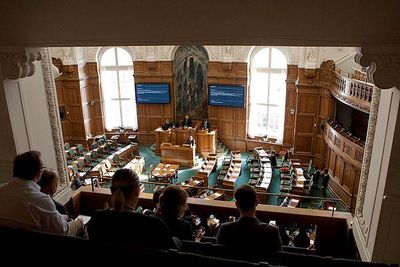 The Folketing , also known as the Danish Parliament in English, is the unicameral national legislature of the Kingdom of Denmark—Denmark proper together with the Faroe Islands and Greenland. Established in 1849, until 1953 the Folketing was the lower house of a bicameral parliament, called the Rigsdag; the upper house was Landstinget. It meets in Christiansborg Palace, on the islet of Slotsholmen in central Copenhagen.

The Folketing passes all laws, approves the cabinet, and supervises the work of the government. It is also responsible for adopting the state's budgets and approving the state's accounts. As set out in the Danish Constitution, the Folketing shares power with the reigning monarch. In practice, however, the monarch's role is limited to signing laws passed by the legislature; this must be done within 30 days of adoption.