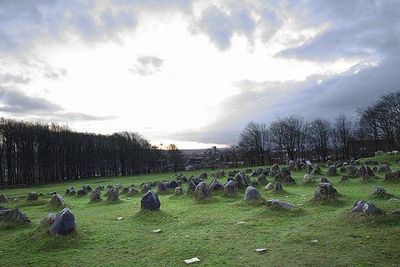 Lindholm Høje is a major Viking burial site and former settlement situated to the north of and overlooking the city of Aalborg in Denmark.

The southern part of Lindholm Høje dates to 1000 – 1050 AD, the Viking Age, while the northern part is significantly earlier, dating back to the 5th century AD in the Nordic Iron Age. An unknown number of rocks has been removed from the site over the centuries, many, for example, being broken up in the 19th century for use in road constructions. The Viking Age part of the burial ground has suffered more from this than the older parts. The first major archaeological excavation, which ultimately included 589 of the approximately 700 graves, began in 1952, although excavations had been conducted as early as 1889.