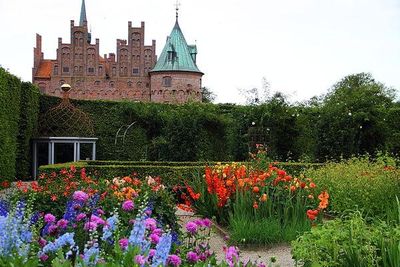 Egeskov Castle is located near Kværndrup, in the south of the island of Funen, Denmark. The castle is Europe's best preserved Renaissance water castle.

Due to the troubles caused by the civil war known as the Count's Feud , general civil unrest, and a civil war introducing the Protestant Reformation, most Danish noblemen built their homes as fortifications. The castle is constructed on oaken piles and located in a small lake with a maximum depth of 5 metres . Originally, the only access was by means of a drawbridge. According to legend, it took an entire forest of oak trees to build the foundation, hence the name Egeskov .