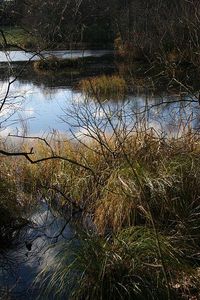 Skjern River is the largest river in Denmark, in terms of volume. The river has its spring in Tinnet Krat in central Jutland, very close to Gudenå, another large river. It drains about one tenth of Denmark and discharges 206 m³/s of water into the Ringkøbing Fjord - a lagoon and former bay of the North Sea. The river has its name from town of Skjern, located at the river delta at Ringkøbing Fjord.

In the 1960s, the Danish government began straightening the rivers run and drain the extensive wetlands that had formed around the river mouth, to prevent the frequent floodings and allow for intensive farming in the region. However, the plan backfired. Without the frequent sediment deposits supplied by floodings, increasing amounts of chemical fertilizers and nutrients were needed to sustain a productive agriculture and the river, unable to spread the sediment across a wide wetland, silted up in many places. Furthermore, the land began to sink as it dried out and ceased to be replenished with fresh sediment. The slow sinking of the land, made the drainage infrastructure increasingly ineffective.