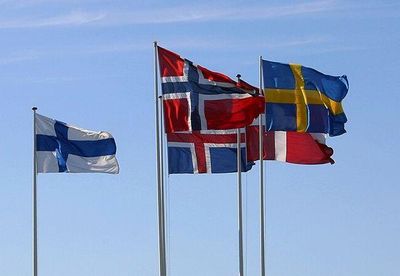 The Nordic Council is the official body for formal inter-parliamentary co-operation among the Nordic countries. Formed in 1952, it has 87 representatives from Denmark, Finland, Iceland, Norway, and Sweden as well as from the autonomous areas of the Faroe Islands, Greenland, and the Åland Islands. The representatives are members of parliament in their respective countries or areas and are elected by those parliaments. The Council holds ordinary sessions each year in October/November and usually one extra session per year with a specific theme.
In 1971, the Nordic Council of Ministers, an intergovernmental forum, was established to complement the Council. The official and working languages of both the Nordic Council and the Nordic Council of Ministers are Danish, Norwegian, and Swedish, which comprise the first language of around 80% of the region's population and learned as a foreign language by the remaining 20%.