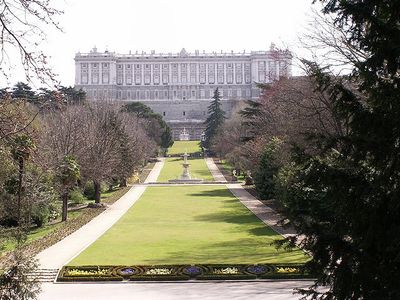 The Royal Palace of Madrid (Spanish: Palacio Real de Madrid, also called Palacio de Oriente, "Eastern Palace") is the official residence of the King of Spain, located in Madrid. King Juan Carlos and the royal family do not actually reside in this palace, instead choosing the smaller Palacio de la Zarzuela, on the outskirts of Madrid. However, the Palacio Real de Madrid is still used for state occasions. The palace is owned by the Spanish state and administered by the Patrimonio Nacional agency. The palace also has the distinction of being the largest royal palace in Western Europe in size, with over a combined area of over 135,000 m and more than 2,800 rooms.

The palace is located on Bailon street, in the western part of downtown Madrid, east of the Manzanares River, and is accessible from the Ëpera metro station. The palace is partially open to public, except when in official use.