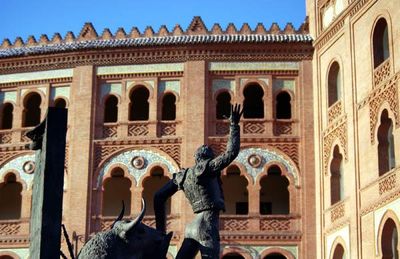 The plaza de toros de Las Ventas, known simply as Las Ventas, is the largest bullfighting ring in Spain, located in the Guindalera quarter of the Salamanca district. It was inaugurated on June 17, 1931. Its seating capacity of 23,798, makes it the third-largest bullfighting run the world, adjacent to bullrings in Mexico and Venezuela, respectively.
This bullring was designed by the architect José Espeliú in the Neo-Mudéjar style with ceramic incrustations. The seats are situated in ten "tendidos". The price of the seats depends upon how close they are to the arena and whether they are in the sun or the shade . The bullfighting season starts in March and ends in October; bullfights are held every day during the San Isidro Fiesta, and every Sunday or holiday during the season. Bullfights start at 6 or 7pm and last for two to three hours.