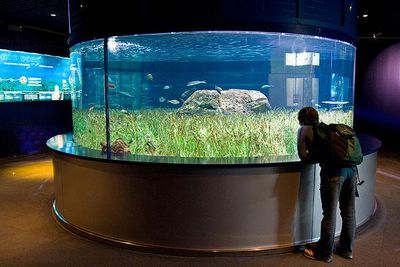 L'Oceanogràfic is an oceanarium situated on the dry Turia River bed to the southeast of the city center of Valencia, Spain, where different marine habitats are represented. It was designed by the architect Félix Candela and the structural engineers Alberto Domingo and Carlos Lázaro. It is integrated inside the cultural complex known as the Ciutat de les Arts i de les Ciències . It was opened on 14 February 2003.

The Oceanographic is the largest complex of its type in Europe, spanning 110,000 square metres and holding a capacity of 42,000,000 litres of water, including a 26,000,000-litre dolphinarium and a 7,000,000-litre ocean tank with sharks, rays and other fish. It is home to 45,000 animals from 500 different species—including sharks, penguins, dolphins, sea lions, walruses, beluga whales, birds, reptiles and invertebrate—all inhabiting nine two-tiered underwater towers representing the Earth's major ecosystems. The aquariums utilize sea water pumped from the La Malva-Rosa beach.