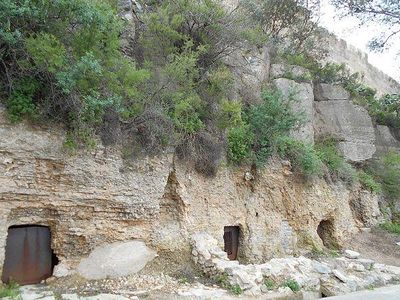 Sagunto Castle is a fortress overlooking the town of Sagunto, near Valencia in Spain. The site's history extends back over two thousand years and includes Iberian, Roman and medieval remains. During the Islamic period, the castle was known as Murbĩtar and Morvedre. The castle was declared a National Monument in 1931.
The sacking of the Iberian settlement by Hannibal in 219 BC led to the outbreak of the Second Punic War. The visible walls are largely Islamic in origin, with substantial modifications taking place after the end of Islamic rule, with the defences being strengthened and modernised. In 1811, during the Napoleonic Wars, the French laid siege to the castle, and were ultimately successful in taking it, after which the defences were repaired.