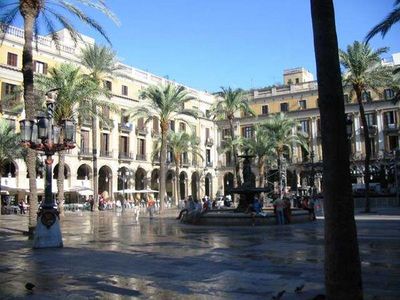 Plaça Reial is a square in the Barri Gòtic of Barcelona, Catalonia, Spain. It is close to La Rambla, and is a popular tourist attraction, especially at night. The plaza hosts many restaurants and some of the city's most famous nightclubs, including Sidecar, Jamboree, Karma and the historic and reinvented speakeasy cocktail bar Nou Pipa Club. The square is the site of the Hotel Roma Reial and is also known for its many outdoor venues. It is a popular meeting place during the summer, during the annual La Mercè festival in September when open-air concerts take place, and during other celebrations such as New Year's Eve.

The original building on the site was the Capuchin convent of Santa Madrona, which was demolished in 1835. Plaça Reial was then designed by Francesc Daniel Molina i Casamajó later in the 19th century. The square is twinned with Plaza Garibaldi, in Mexico City.