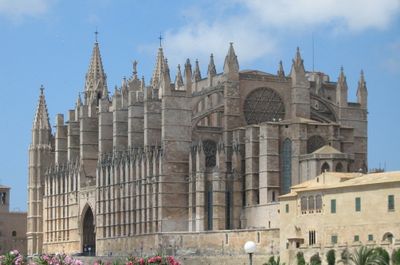 La Seu cathedral is built on the site of an existing Arab mosque. It is 121 metres long, 55 metres wide and 44 meters of nave height. Designed in Spanish "levantino" Gothic style with influences of the North European gothic, it was founded by King James I of Aragon in 1229 but finished only in 1601.

Fifty years after a restoration of the Cathedral had started, Antoni Gaudí was invited in 1901 to take over the project. While some of his ideas were adopted - moving the choir stalls from the middle nave to be closer to the altar, as well as a large canopy - Gaudí abandoned his work in 1914 after an argument with the contractor.