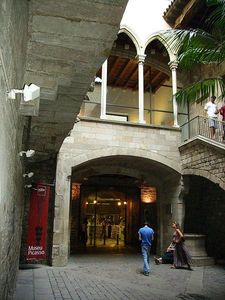 The Museu Picasso is an art museum in Barcelona, in Catalonia, Spain. It houses an extensive collection of artworks by the twentieth-century Spanish artist Pablo Picasso, with a total of 4251 of his works. It is housed in five adjoining medieval palaces on Montcada Street in the La Ribera neighborhood in the Old City of Barcelona. It opened to the public on 9 March 1963, becoming the first museum dedicated to Picasso's work and the only one created during his lifetime. It has since been declared a museum of national interest by the Government of Catalonia.