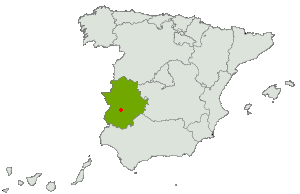 Mérida is a city and municipality of Spain, part of the Province of Badajoz, and capital of the autonomous community of Extremadura. Located in the western-central part of the Iberian Peninsula at 217 metres above sea level, the city is crossed by the Guadiana and Albarregas rivers. The population is 60,119 in 2017.

Emerita Augusta was founded as a Roman colony in 25 AD under the order of the emperor Augustus to serve as a retreat for the veteran soldiers of the legions V Alaudae and X Gemina. The city, one of the most important in Roman Hispania, was endowed with all the comforts of a large Roman city and served as capital of the Roman province of Lusitania since its founding and as the capital of the entire Diocese of Hispania during the fourth century. Following invasions from the Visigoths, Merida remained an important city of the Visigothic Kingdom of Hispania in the 6th century. In the 713, the city was conquered by the Umayyad Caliphate, and remained under Muslim rule. The Mozarabic people of the island rebelled repeatedly against the Caliphate authorities in the 9th century and the city began a slow decline. After the Almohad rule, Mérida, that had acknowledged Ibn Hud against the former, was seized by Alfonso IX of León in 1230. It is, together with Badajoz, ecclesiastically the metropolitan seat of the Archdiocese of Mérida-Badajoz. It became the capital of the autonomous community of Extremadura in 1983. The archeological site in the city has been a UNESCO World Heritage site since 1993.