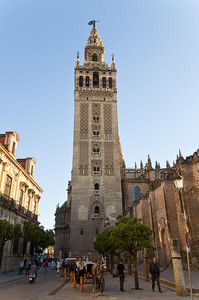 The Giralda is the bell tower of Seville Cathedral in Seville, Spain. It was built as the minaret for the Great Mosque of Seville in al-Andalus, Moorish Spain, during the reign of the Almohad dynasty, with a Renaissance-style top added by the Catholics after the expulsion of the Muslims from the area. Dating from the Reconquest of 1248 to the 16th century and built by the Moors. The Giralda was registered in 1987 as a World Heritage Site by UNESCO, along with the Alcázar and the General Archive of the Indies. The tower is 104.1 m in height and remains one of the most important symbols of the city, as it has been since the Middle Ages.

The mosque was built to replace the Umayyad mosque of 'Addabas, since the congregation had grown larger than the modest prayer hall could accommodate. It was commissioned in 1171 by caliph Abu Ya'qub Yusuf . Construction was slowed down by the redirection of an existing city sewer that needed to be moved to accommodate the broad foundation for the building, an engineering obstacle that slowed progress by four years.