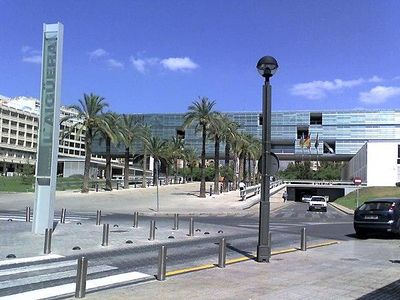 Benidorm has been a tourist destination within Spain since 1925, when its port was extended and the first hotels were built, though it would not be until the 1950s that it became renowned as a summer destination for people coming from inland Spain, especially Madrid. Today it is known for its hotel industry, beaches and skyscrapers and receives as many tourists from abroad as from Spain. According to the 2014 census, Benidorm has a permanent population of 69,010 inhabitants, making it the fifth-most populous town in the Alicante province and the ninth in Valencian Community.
It is thought there were settlements in the Benidorm area possibly as far back as 3000 BC, including evidence of Roman and Punic remains. However, settlements in the area were small and it was not until the arrival of the Moors that the local population began to grow during the era of the Umayad dynasty. The Christian King James I of Aragon reconquered the region in 1245 and Benidorm first officially became known in 1325, when Admiral Bernat de Sarrià of Polop awarded it a town charter as a way of removing the Moors and allowing Christians to inhabit the area. Strategically, the town was also used by Bernat de Sarrià to stop the rising power of Admiral Roger of Lauria, lord of Altea, in the south of the Kingdom of Valencia.