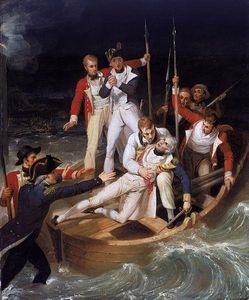 The Battle of Santa Cruz de Tenerife was an amphibious assault by the Royal Navy on the Spanish port city of Santa Cruz de Tenerife in the Canary Islands. Launched by Rear-Admiral Horatio Nelson on 22 July 1797, the assault was defeated, and on 25 July the remains of the landing party withdrew under a truce, having lost several hundred men. Nelson himself had been wounded in the arm, which was subsequently partially amputated: a stigma that he carried to his grave as a constant reminder of his failure.
In February 1797 the British defeated a Spanish fleet near Cape St. Vincent but failed to strike a solid blow against the Spanish Navy in the uneven struggle. Admiral John Jervis sailed for Lisbon after the engagement, frustrated at the escape of several valuable prizes including the Santísima Trinidad. New orders from the Admiralty demanded that he subdue and blockade the Spanish port of Cádiz, where much of the battered Spanish squadron had sought shelter. The First Sea Lord thought that the ease of Jervis' victory over José de Córdoba y Ramos guaranteed a successful attack on that southern harbour. Events proved otherwise.