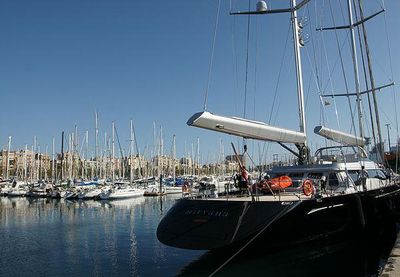 Port Vell is a waterfront harbor in Barcelona, Catalonia, Spain, and part of the Port of Barcelona. It was built as part of an urban renewal program prior to the 1992 Barcelona Olympics. Before this, it was a run-down area of empty warehouses, railroad yards, and factories. 16 million people visit the complex each year.
It is now a focal point of the city and tourist attraction, containing the Maremàgnum , IMAX Port Vell and Europe's largest aquarium containing 8000 Fish and 11 sharks contained in 22 basins filled with 6 million litres of sea water. A pedestrian walkway, Rambla de Mar, connects La Rambla to Port Vell. It incorporates a swing bridge, in order to allow ships to enter and exit the harbour.