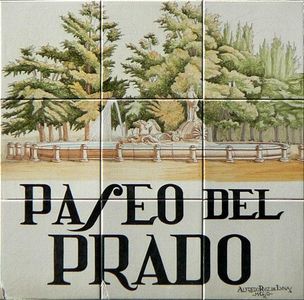 This densely tree-lined, wide and central avenue is a landmark for the city residents and the location of important cultural and tourist spots in the city, including the so-called Golden Triangle of Art, which encompasses three museums: the Prado Museum , the Thyssen-Bornemisza Museum , and the Reina Sofia Museum . In the vicinity are located the Parque del Buen Retiro and the Casón del Buen Retiro , as well as the headquarters of the Real Academia Española , the Bolsa de Madrid , and the Congreso de los Diputados .