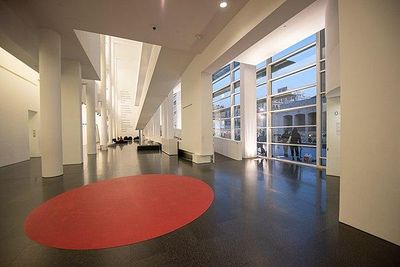 The Barcelona Museum of Contemporary Art is situated in the Plaça dels Àngels, in El Raval, Ciutat Vella, Barcelona, Catalonia, Spain. The museum opened to the public on November 28, 1995. Previous directors were Daniel Giralt-Miracle , Miguel Molins , Manuel J. Borja-Villel , and Bartomeu Marí , while the current director, since 2015 is Ferran Barenblit.

In 1959, art critic Alexandre Cirici Pellicer formed a group of contemporary artists showing work in a series of 23 exhibitions with the hopes of beginning a collection for a new contemporary art museum in Barcelona. It was not until 1986 that the Barcelona City Council recommended the American architect Richard Meier & Partners to design the museum. Art critics Francesc Miralles and Rosa Queralt were hired to write the museum’s mission statement. In 1987, the MACBA Foundation was created. In the following year the MACBA Foundation, in conjunction with the Generalitat de Catalunya and the Barcelona City Council, founded the MACBA Consortium in order further the process of the museum. The Consortium commissioned Meier later that year to build the museum. This was a controversial issue considering that the museum had no collection at the time of construction. The museum opened to the public in 1995, well after the 1992 Summer Olympics for which it was planned.