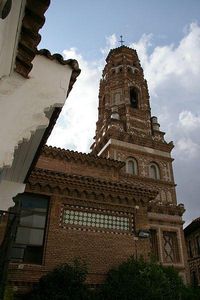 The Poble Espanyol is an open-air architectural museum in Barcelona, Catalonia, Spain, approximately 400 metres away from the Fountains of Montjuïc. Built for the 1929 Barcelona International Exposition, the museum consists of 117 full-scale buildings replicated from different places in the Iberian Peninsula, joined together forming a small town recreating urban atmospheres of disparate places in Spain. It also contains a theater, restaurants, artisan workshops and a museum of contemporary art.

The museum was built for the 1929 Barcelona International Exposition as an exhibit of the architecture and townscapes found in different places in Spain. The idea was promoted by the Catalan architect Puig Cadafalch and the project was realized by architects Francesc Folguera and Ramon Reventós, art critic Miquel Utrillo and painter Xavier Nogués. The four professionals visited over 600,000 sites in Spain to collect examples as an attempt to synthesize characteristics that might be attributed to the Iberian Peninsula. In reality, though, this sort of patched-up ensemble is proof of the wide variety, and therefore the utmost impossibility, to fulfill its claim to be a ‘Spanish’ Town, because there is not a unified style or solid common treats shared among the different cultures that form Spain.