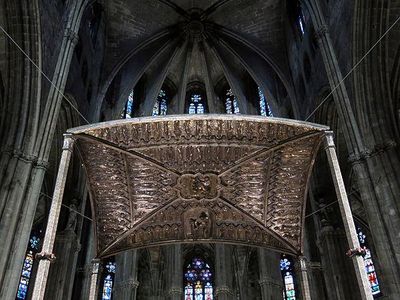 Girona Cathedral, also known as the Cathedral of Saint Mary of Girona , is a Roman Catholic church located in Girona, Catalonia, Spain. It is the seat of the Roman Catholic Diocese of Girona. The cathedral's interior includes the widest Gothic nave in the world, with a width of 22 metres , and the second-widest of any church after that of St. Peter's Basilica . Its construction was begun in the 11th century in the Romanesque architectural style, and continued in the 13th century in the Gothic style. Of the original Romanesque edifice only the 12th-century cloister and a bell tower remain. The second bell tower was completed in the 18th century.

A primitive Christian church existed here before the Islamic conquest of Iberia, after which it was converted into a mosque, in 717. The Franks reconquered the city in 785 under Charlemagne and the church was reconsecrated in 908.