RouteYou » Wikipedia » Places of interest » Castle of the Three Dragons 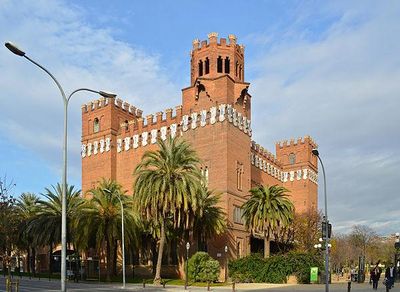 The Castle of the Three Dragons , is the popular name given to the modernisme building built between 1887-1888 as a Café-Restaurant for the 1888 Universal Exposition of Barcelona by Lluís Domènech i Montaner. This name was probably adopted from the 1865 play by Serafí Pitarra.
In its time it was one of the main buildings of the exhibition, and before it the Palace of Fine Arts had ceased to exist. It was at the end of the main street running from the Arc de Triomf to the Parc de la Ciutadella. Work began in September 1887, and suffered many delays, and so, on April 8, the day of the inauguration, it was not ready, delaying its opening until August 17. For this reason Domènech i Montaner resigned as the responsible architect.