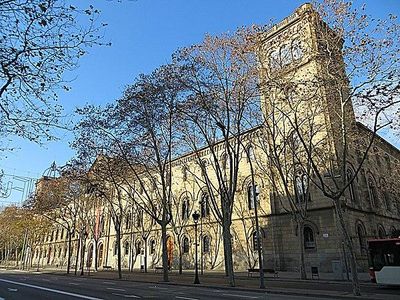 The University of Barcelona is a public university located in the city of Barcelona, Catalonia in Spain. UB is widely considered to be the best university in Spain and one of the most prestigious universities outside the English-speaking world. In 2020, it was ranked 1st in the European Union by uniRank and 55th in the world by the NTU Ranking. Established on 3 November 1450, it is the oldest university in Catalonia and one of the oldest universities in the world. With 63,000 students, it is one of the biggest universities in Spain.
The University of Barcelona is the principal centre of university research in Spain and has become a European benchmark for research activity, both in terms of the number of research programmes it conducts and the excellence these have achieved. According to the 2011 CYD Report, it is the highest-placed Spanish university in terms of scientific output, with a total of 15,290 papers published between 2006 and 2010, also leading the ranking of Spanish universities in terms of percentage of papers published in high impact journals. The UB publishes more research than any other Spanish institution with the exception of the Spanish National Research Council.