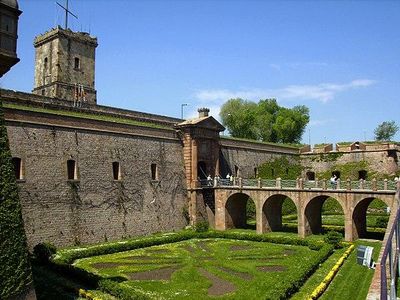 Montjuïc translates to "Jewish Mountain" from medieval Latin and Catalan, and remains of a medieval Jewish cemetery have been found there. Some sources suggest that Montjuïc is related to the Latin phrase Mons Jovicus . The city of Girona has a hill or mountain named Montjuïc just to the north of its old quarter with a similar history; its name is derived from the medieval Jewish cemetery that was there.
Montjuïc, because of its strategic location at the foot of the Mediterranean, and alongside an important river communication channel such as the Llobregat River, was the birthplace of the city of Barcelona. In recent years, archaeological discoveries that have been carried out have changed the vision of the history of Barcelona. Montjuïc became since the Iberian period, and especially Roman, the main quarry of Barcelona, which meant a drastic change in the mountain's physics.