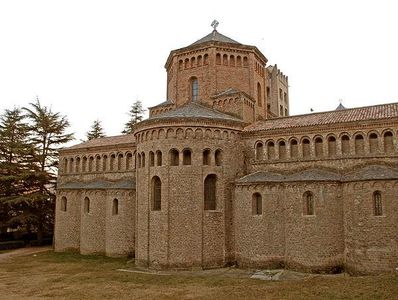 The Monastery of Santa Maria de Ripoll is a Benedictine monastery, built in the Romanesque style, located in the town of Ripoll in Catalonia, Spain. Although much of the present church is 19th century rebuilding, the sculptured portico is a renowned work of Romanesque art.
The Monastery of Santa Maria de Ripoll was founded in 888 by Count Wilfred the Hairy who used it as a centre to bring about the repopulation of the region after conquering it. Wilfred's son, Ridulph, was educated there and was later abbot of the monastery, as well as bishop of Urgell. The monastery grew rapidly, and was subsequently reconsecrated in 935, 977 and 1032, though the monks are known to have been established there permanently only from 1025 or 1032. The scriptorium and the monastic school quickly gained renown under Arnold Scholasticus. The monastery had several offshoots which included the abbeys of St. Martin-du-Canigou and that of Santa Maria de Montserrat. It was also known for its collection of manuscripts which numbered 246 by the year 1046, and later included the 13th century Gesta comitum Barcinonensium, considered to be the first history of Catalonia and written by the monks themselves.