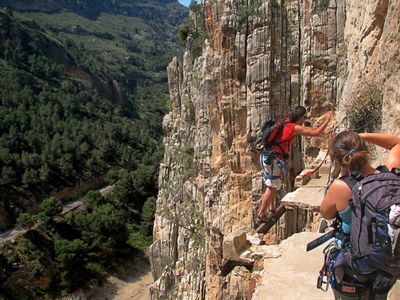 El Caminito del Rey or The King's little pathway is a walkway or via ferrata pinned along the steep walls of a narrow gorge in El Chorro. The origin of this path starts in 1901.In 1901 it became obvious that workers at the hydroelectric power plants at Chorro Falls and Gaitanejo Falls needed a walkway to cross between the falls, to provide for transport of materials, and for the inspection and maintenance of the channel. Construction of the walkway took four years and it was finished in 1905. The reference to the king happened in 1921. In that year King Alfonso XIII crossed the walkway for the inauguration of the dam Conde del Guadalhorce and it became known by its present name.