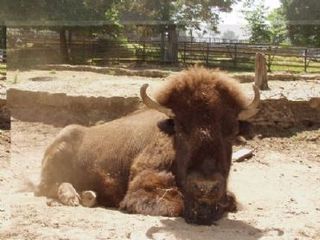 Bison bison
The American bison or buffalo was the primary source of food for Native Americans that hunted for their meat, skin, bones, etc., But always with great respect and admiration for their qualities, and thanks for all the benefits .
It is estimated that they could expect to live 7 million copies but with the arrival of the Spanish were hunted almost to extinction in the nineteenth century, leaving only 750 copies in 1890.
Bronx Zoo in the U.S., kept a pack survivors, which was restored population of Yellowstone National Park and other reserves. Currently there are approximately half a million individuals.