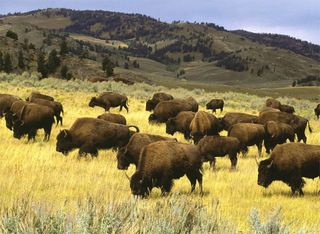 It is a great cattle which used to live on the plains of northern Mexico, the United States and Canada in large flocks, ranging from the Great Slave Lake to Mexico and from eastern Oregon to the Appalachians. There are two subspecies: the plains bison (B. b. bison) and the wood bison (B. b. athabascae) of Canada.

Legally protected since the beginning of the century in order to avoid extinction, now live in reserves in the great national parks of the United States.