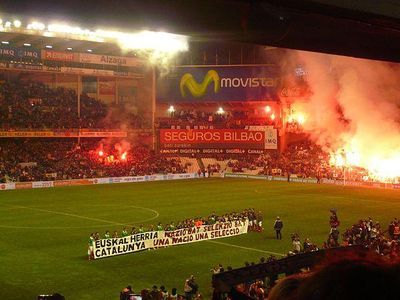 San Mamés Stadium , was a football stadium in Bilbao, Biscay, Spain. The stadium was the home of Athletic Bilbao, known as Los Leones de San Mamés-Bilboko lehoiak . They are known as Los Leones because their stadium was built near a church called San Mamés . Mammes was an early Christian, born in A.D. 259, who was thrown to the lions by the Romans.

Opened in 1913, until its demolition it was Spain's oldest stadium a characteristic that gave rise to the nickname La Catedral , together with its revered status as one of the nation's most important venues, the devotion shown by the team's followers who attended the matches, the site's religious heritage and the fact that the city itself did not have a cathedral for some years afterwards . The nickname of the stadium is unconnected to the building that appears on the club crest, which is the Church of San Antón and its bridge, also featured on the Bilbao city coat of arms.