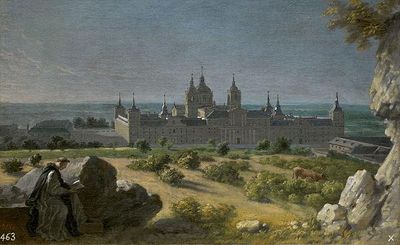 El Escorial comprises two architectural complexes of great historical and cultural significance: the royal monastery itself and La Granjilla de La Fresneda, a royal hunting lodge and monastic retreat about five kilometres away. These sites have a dual nature; that is to say, during the 16th and 17th centuries, they were places in which the power of the Spanish monarchy and the ecclesiastical predominance of the Roman Catholic religion in Spain found a common architectural manifestation. El Escorial was, at once, a monastery and a Spanish royal palace, although Philip II is the only monarch who ever lived in the main building. Established with a community of Hieronymite monks, it has become a monastery of the Order of Saint Augustine. It was also a boarding school .