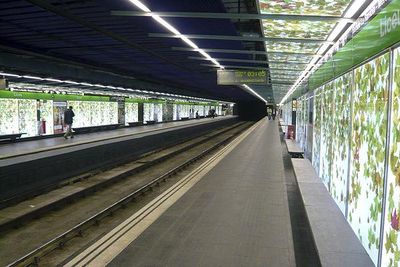 Liceu is a Barcelona Metro station situated under the La Rambla between Gran Teatre del Liceu and Mercat de la Boqueria in the Barri Gòtic, part of Barcelona's district of Ciutat Vella. It is served by TMB-operated Barcelona Metro line L3.
The station consists of a single level, on which there are two tracks served by two side platforms. The station has two pairs of street entrances, with one pair at the Teatre del Liceu end of the station and the other at the Mercat end. Each entrance in a pair leads only to one of the two platforms, and there is no connection between the two platforms without exiting the station and returning to street level.