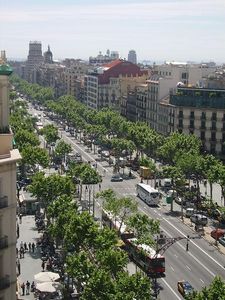 Passeig de Gràcia is one of the major avenues in Barcelona and one of its most important shopping and business areas, containing several of the city's most celebrated pieces of architecture. It is located in the central part of Eixample, stretching from Plaça Catalunya to Carrer Gran de Gràcia.
Formerly known as Camí de Jesús , the Passeig de Gràcia was originally little more than a quasi-rural lane surrounded by gardens joining Barcelona and Gràcia, which was then still a separate town. This was still the case at the time of the first urbanisation project in 1821, which was devised by the liberal city council, and led by Ramon Plana. This project had to be cancelled due to the epidemics that were raging in Barcelona at the time.