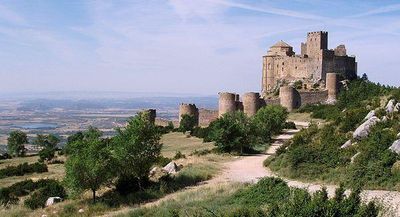 The Castle of Loarre is a Romanesque Castle and Abbey located near the town of the same name, Huesca Province in the Aragon autonomous region of Spain. It is one of the oldest castles in Spain.
The castle was built largely during the 11th and 12th centuries, when its position on the frontier between Christian and Muslim lands gave it strategic importance. The first of the two major building programmes began circa 1020, when Sancho el Mayor reconquered the surrounding lands from the Muslims.