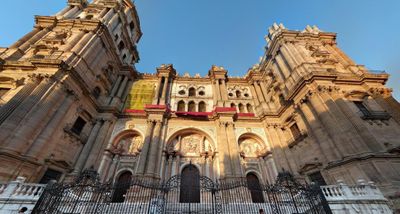 Established in 1490, this is Málaga's oldest church and it was built on the site of a former mosque. Only the central entrance in the Mudéjar style remains of the original façade. The square tower in the same style was conceived as a separate minaret and was attached to the church in the 16th century. From Calle Granada, a beautiful Almohad sebka (a grid of rhombuses) cloth can be seen in one of its sections.

Inside there are three naves with valuable works by Alonso Cano and Niño de Guevara. It also contains significant items of jewellery, such as a 16th century, plateresque-style chalice with star-shaped foot and hexagonal body.

The Easter processional images of Virgen del Amor y Jesús el Rico by Navas Parejo are venerated in one of its chapels.