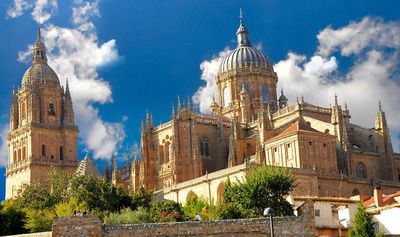 The Cathedral of the Assumption of the Virgin, popularly called New Cathedral, is one of the two cathedrals of the city of Salamanca, in Spain, next to the Old Cathedral. It is the seat of the diocese of Salamanca. It was built between the 16th and 18th centuries, mixing late Gothic, Renaissance and Baroque styles. It is the second largest cathedral in Spain in dimensions and its bell tower, 93 meters high, is also one of the highest in Spain.

The new cathedral was built between 1513 and 1733, conserving the old one. At first they thought to demolish it, although the criterion of keeping it open to worship while the construction of the new one was carried out was imposed. When finishing the works in century XVIII, reconsidered the idea to destroy it and for that reason it is conserved at the moment. However, the south wall of the New Cathedral rests on the north wall of the old one, which had to be reinforced towards the interior of the old temple, whose side nave was partially reduced with the new construction. The tower of the new cathedral was built on the tower of the bells of the Old Cathedral.

The idea of building a new cathedral arose in the 15th century due to the demographic increase of the city, especially due to the strong attraction of the University. Therefore, the Old Cathedral seemed at that time "small, dark and low". They had the support of Fernando el Católico, who in 1509 ordered the architects who had worked in Toledo and Seville, Antón Egas and Alonso Rodríguez, to go to Salamanca to take a trace of the new temple.

The cathedral, after various discussions, was projected parallel to the old one, made with Frankish stone of Villamayor and in Gothic style. It has a rectangular floor plan, with three naves and two more chapels with niches. In principle the head was to end in ambulatory and polygonal apses, but finally the project would be changed to the current one, which finishes off the temple with a rectangular headboard that finishes off a living room plan. The first stone was laid in 1512, Francisco de Bobadilla being Bishop of Salamanca.

During most of the seventeenth century the works were stopped and resumed again in the eighteenth, until its completion in 1733. The cathedral suffered the devastating effects of the Lisbon earthquake, which occurred on November 1, 1755, leaving visible signs in the cracks and broken windows. After the earthquake the dome had to be rebuilt (by Juan de Sagarvinaga) and the bell tower was reinforced, which was more slender, very similar to that of the Cathedral of Segovia. The bell tower suffered serious damage during the earthquake, reaching to bend and even threaten ruin. After consulting several architects who recommended its demolition, it was finally Baltasar Dreveton who proposed to lay it down with 8 stretched chains and cover it with stone in the form of a slope reaching the body of bells (about 40 meters from the ground1). Jerónimo García de Quiñones is in charge of the direction of the work with Manuel de los Ríos. Thus it can be contemplated at the moment, lined with stones and inclined towards one of its sides by the effect of the Lisbon earthquake. Currently this catastrophe is remembered with the tradition of «Mariquelo» on October 31.

Towards 1812 the army of French occupation demolished the block of houses located to the north of the cathedral, creating the present place of Anaya and highlighting the north facade, not prepared for the exhibition and little graceful. This fact has caused that the most known photos of the cathedral are taken from this side, making forget the main facade, much more interesting but located in a narrow street and without enough amplitude to obtain good photographs.