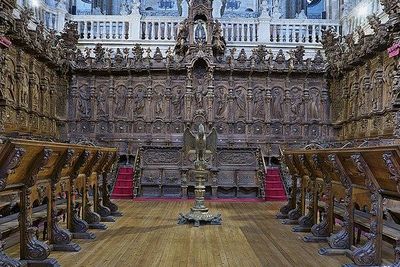 The New Cathedral is, together with the Old Cathedral, one of the two cathedrals of Salamanca, Spain. It was constructed between the 16th and 18th centuries in two styles: late Gothic and Baroque. Building began in 1513 and the cathedral was consecrated in 1733. It was commissioned by Ferdinand V of Castile of Spain. It was declared a national monument by royal decree in 1887.
The building began at a time when the gothic style was becoming less popular and was merging with the new Renaissance style, giving the resulting Plateresque style in Spain. However, this cathedral retained more of its Gothic character because the authorities wanted the new cathedral to blend with the old one. Thus the new cathedral was constructed, continuing with Gothic style during the 17th and 18th centuries. However, during the 18th century, two elements were added that broke with the showy form with the predominant style of the building: a Baroque cupola on the transept and the final stages of the bell tower . The new cathedral was constructed without the subsequent destruction of the old cathedral as normally happened but a wall of the new cathedral, leans on the North wall of the old one. For this reason, the old cathedral had to be reinforced, and the bell tower was constructed on the old one. Two of the main architects of the cathedral were Juan Gil de Hontañón and his son Rodrigo Gil de Hontañón in 1538.