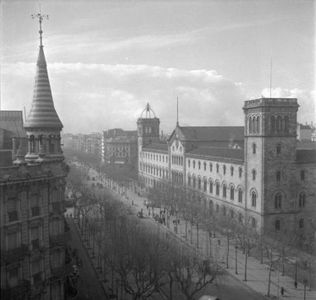 Source: Building of the University of Barcelona in 1912. Source: Institut Cartogràfic de Catalunya.

The central building of the University of Barcelona is another work of the architect Elies Rogent built up between 1863 and 1882 and inaugurated in 1871 in a new zone of the city, l'Eixample, next to the old city. The University was re-established in 1837, after more than a century of being absent from the city as a result of the victory of king Felip V in the Succession War of 1714. All the courses would since be taught there, except those of medicine, which were held in the Hospital de la Santa Creu and, since 1905, in the Hospital Clínic.

The reception of Darwinism in Spain was closely linked to a political and social event of great relevance: the Revolución of 1868. The arguments in favor of the first generation of Spanish evolutionists and those of their opponents marked the ideological positions that would endure until the end of the century. In fact, in Spain, the majority of university commencement speeches were radically anti-Darwinist until 1900, at the same time in which politicians often aligned with the ecclesiastic hierarchy in the fight against Darwin's image.
In Barcelona, a relevant figure of the University of the end of the XIXth century and of introducing evolutionary ideas was the professor of Natural history, Odón de Buen. Apart from promoting innovations in academic training like laboratory practices and field work, he taught "republican" natural history in the classroom as an intellectual legacy of the revolution of '68 which was supported by editions of textbooks like his "Tratado elemental de Zoología".
It was precisely the inclusion by decree in the Índice de Libros Prohibidos, on June 14th, 1895, of two editions of this book and the prohibition of their use in the classroom which had provoked a great controversy in the University, which ended on October 7th with the temporary suspension of his chair. When Odón de Buen returned some months later, his classroom was full and his books more sought after than ever. Odón considered this affair to be the product of the ignorance and hegemony of the Catholic Church. Because of this, he since devoted himself to popularize, beyond the scope of the academy, the positive image science as a tool in the hands of people for the regeneration of the country. He edited "Historia Natural popular" as an instrument to transmit evolutionary ideas, especially in the republican, free-thinker and even anarchists circles.