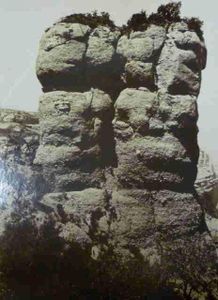 Source: Image of the cave of the dragon of Sant Llorenç del Munt that illustrates the role of photography a

The Centre Excursionista de Catalunya, since its creation in 1876 as Associació Catalanista d'Excursions Científiques, occupied the building on Paradís Street, number 10. A couple of years later, the Catalanist association split and a new association was named the Associació d'Excursions Catalana. The aspirations of both societies were too similar and, in fact, they shared most of their associates. In the end, in 1890, both unified into a single entity that took the current name. In the courtyard of the locale, they raised the four columns of a roman temple to Augustus.

The beginnings of excursionism were linked to naturalistic activity. The first community of travelers to be organized was created in 1876 with the name Associació Catalanista d'Excursions Científiques. The trips were aimed at investigating the scientific, literary and artistic culture of the country. That is, they traveled across the country to collect traditions, to know the geography, to describe the different kinds of vegetation and to discover archeological remains.
The creation of the association produced in the context of the Renaixenca, a cultural movement that in the beginning was very influenced by European romanticism. In Catalonia, however, beyond being a movement for the vindication of the Catalan language, which it was, it also became a patriotic movement that permeated the cultural and scientific spheres of civil society.
The founders and associates were men of the bourgeoisie that wanted to promote the study of the country and popularize its cultural and natural heritage. It was propelled by amateurs, although numerous people of academic prestige belonged to it, like Norbert Font, Lluís Marià Vidal, Artur Bofill or Jaume Almera. In fact, the association was a place of reunion where Catalan naturalists met with literary figures and ideologues of Catalanism like Jacint Verdaguer, Marià Aguiló and Valentí Almirall.