Monument a Rius i Taulet 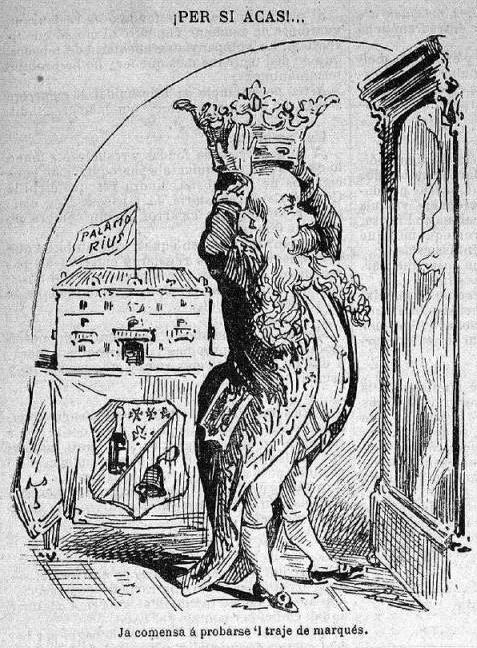 Cartoon of Rius i Taulet by Manuel Moliné i Muns.

Francesc de Paula Rius i Taulet was the mayor of Barcelona representing the liberal-monarchist party for four terms, the last of which coincided with the Exhibition. Two years after the event, in 1890, Rius and Taulet died. Shortly after, this monument was erected. It was designed, again, by Pere Falqués and Manuel Fluxà was in charge of the sculptures.

"Haz lo que debas, aunque debas lo que hagas" (do what you ought, though you will owe for what you do). This joke, in Spanish, was the answer that Rius i Taulet gave to the Catalan journalists who asked about the economic cost of the Exhibition. Certainly he had thrust and wanted to get the project off the ground, but he also left the council with heavy debt as a result of the event. Catalan industrialists and the Spanish government, after long negotiations which were brilliantly fictionalized by Eduardo Mendoza in "La Ciudad de los Prodigios (The City of Marvels)", also contributed financially to the Exhibition. According to local gossip, Madrid contributed just enough so the the Catalans could not say that they had done it alone, but not enough to prevent municipal debt. In any case, the Exhibition represented, for the first time, an opening of the city to the sea with the creation of the Paseo de Colón, ranging from the monument to the "discoverer" to the entrance of the Citadel. Also at this time, the street lights of Las Ramblas and Paseo Colon were electrified. The Council launched several initiatives to attract foreign visitors to the exhibition, which was announced throughout Europe. The train from France was offered at half price and a hundred policemen of the Barcelona Guardia Urbana learned French to communicate with tourists. This measure was widely applauded in the press which considered it very useful. In the current Pujades street, in front of the entrance to the Ciutadella, one of the great attractions of the exhibition was placed: the Roller Coaster.