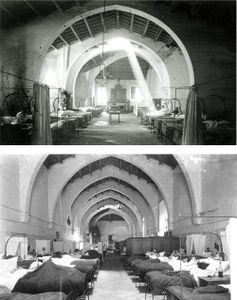 The Hospital de Santa Creu (Hospital of the Holy Cross) is one of the most ancient hospital institutions in the world. Founded in 1401 by Martí l'Humà, it unified several hospitals that, since the Xth to XIVth centuries, had been settled in the suburbs of the city, then a place beyond the city walls and scarcely inhabited. The hospital, of Gothic style, was erected and remodeled during three centuries and was functioning until the first decades of the XXth century. A few years before the Hospital left its enclosure in the Raval, in 1926, Antoni Gaudí died there, after being run over by a tram. The historic building has held, since the beginning of the XXth century, the Biblioteca de Catalunya (Library of Catalonia).

At the corner of Hospital and Gadrunya streets -the current Colom square-, there was a house in which the sick were cared for ever since the end of the XIIth century, and which was converted, in 1219, into a hospital by the canon Colom. Known also as the "Casa dels Orats" (House of the Insane), it was the first hospital in the Iberian Península to hold the insane. The Hospital d'en Colom was one of six hospitals that became part of the Hospital de Santa Creu once they were consolidated into only one institution.
In 1401, the works began on the construction of the new hospital for assisting the "poor sick, children, insane, pilgrims and other miserable people of all conditions". In XVth century society, poverty was looked on as a source of contagion and infection. The preoccupation of the authorities with controlling that population motivated the creation of great aide institutions known as general hospitals. To have a new hospital was not only "convenient and useful", but it was also a source of pride and honor for the city.
Apart from the poor sick, the hospital also held insane members of wealthy families, who paid for this service. In fact, it seems that the stay of the sick in the hospital might have been paid for in most cases, and, only exceptionally, would these charges be exempted for those patients in situations of extreme poverty.
The new building was formed initially of four wings that enclosed a cloister and which was erected and transformed throughout the three following centuries. The naves and the monumental stairs of the courtyard were built up between 1410 and 1568. During the XVIth century, the southern wing was suppressed and a new courtyard was created adjacent to the former one where the two monumental stairs in the entries of the disappeared nave were built up.
In the courtyard, one can still look at the bars, in the Renaissance style (1696), of the old Hospital apothecary. This was the place where the pharmacist dispensed remedies to be distributed to the different wards of the hospital. Today, it is the headquarters of the Reial Acadèmia de Farmàcia de Catalunya.