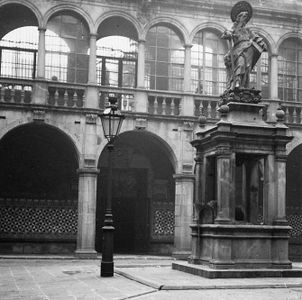 Source: Courtyard of the Casa de Convalescència, headquarters of the Institut d&#39;Estudis Catalans (1912)

The Casa de Convalescència (House of Convalescence) was finished in the XVIIth century following in the Renaissance style. Created in 1622, it was not finished and fully functioning until 1680. It was built as a result of the scarcity of space in the Hospital: this house held the sick during their recuperation. On the facade of the building, one can observe the baroque decoration of the frontis. The hall is an open space with ribbed vaults that bear the arms of Pau Ferran, its main founder. Today the Casa de Convalescència holds the headquarters of the Institut d'Estudis Catalans and it preserves inside a beautiful and unknown baroque chapel.

In the mid-XVIth century, the hospital staff had become insufficient, especially in times of epidemics. The rooms were shared and the sick were often housed on the floor, laid upon blankets and straw mattresses, while the privileged occupied the few beds available. Although there were precautions for not mixing the contagious patients with those with common illnesses, these measures lost their effectiveness in times of crises, when it was easy to fall sick again. For this reason, it was seen as a need to have a separate place where the sick could go to recover once they were well.
In this context, some labor unions had paid for places inside the hospital so as to insure the convalescence of the sick that were under their protection. The Hospital administration planned, in 1586, the creation of some exclusive rooms for that purpose near Egipcíaques street and, in 1596, Fra Adrià Maymó, prior of Catalonia of the order of Saint John of Jerusalem, instituted a "Convalescence" in the new part of the nave of Saint Roc.
But the initiative that actually propelled the building of a house for the convalescence of the sick inside the hospital enclosure of Santa Creu came from three women of the nobility, Lucrècia de Gualba, Victòria Astor and Helena Soler, jointly with the gentleman Pau Ferran. With their support and funding of the mission of asylum for the Hospital, a more medicalized assistance was added.
Legend tells that Pau Ferran was a merchant and owner of ships that traded with America. On one of these trips the ships did not return and Pau Ferran lost his fortune. Some time later, he became sick and was admitted to the Hospital of Santa Creu. Once he recovered, while he survived as a beggar in front of the gate of Saint Maria del Mar, one day he received the news of the arrival of his ships with all their load, and he could leave forever his life of poverty, and, to prove his gratitude, he left his entire legacy to the poor convalescents.