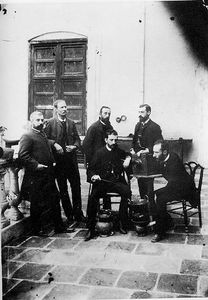 Source: Ramon y Cajal in the preparation to make a photography with their friends in Valencia (1887).

During the years of his stay in Barcelona, Santiago Ramón y Cajal lived in this house with his wife Silveria and their five children and carried out his research. In 1887, Cajal arrived to the city to work at the University of Barcelona. Cajal developed there his theory of the Neuron which earned him the first Nobel prize of Medicine in 1906. This shows that, by the end of the XIX and early XX centuries, in Barcelona the medical practice was not only practiced in the hospitals, but also in the laboratory.

During his research in Barcelona, Santiago Ramón y Cajal saw the neurons of the nervous system as individual cells, contradicting the dominant thought at the time, which viewed the system as a great united net. Cajal's discovery brought him worldwide notoriety and in 1906 he received the first Nobel prize in Medicine and Physiology of the Spanish state, which he shared with the Italian Camilo Golgi, who developed the method used by Cajal to tint the cells. However, Golgi disagreed with the views of Cajal and in his acceptance speech for the prize he attacked Cajal and his new theory, for which, ironically, he had received the prize.
Cajal was an indefatigable worker and he passed long hours closed in his laboratory with the strict rule to his wife of not being disturbed under any circumstances. When he was in Barcelona, one of his daughters became sick and finally died. The legend says that his wife didn't disturb him, even when his daughter died. But it could also be that she alerted him but that he, immersed in a crucial moment of his research, did not hear her.
Another legend explains that when, on October 6th, 1906, being yet in Madrid, Cajal received a telegram with the notification of having won the Nobel prize, he thought it was a joke by his students and he went to sleep. He was only convinced of it the morning when the news appeared in all the newspapers.
Apart from his well-known career as a researcher, Ramón y Cajal showed a great passion for photography, which was more than simply a pleasurable distraction for him. Cajal introduced photography into the laboratory as a complement to his research and he produced hundreds of glass plates (the majority have not been preserved). He also performed experiments with photography: he was well informed of the advances in the field, and he was especially interested in color photography.