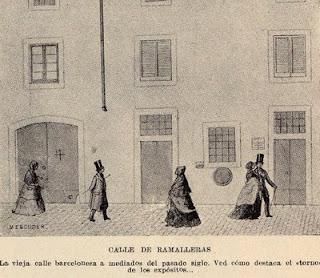 Source: Gravure in which one could appreciate the drop-off box for orphans on Ramalleres Street in the mid

The origin of the Casa de Misericòrdia (House of Compassion) dates back to 1581, when the doctor Diego Pérez de Valdivia, a religious man, and professor at the Estudis Generals, worried by the high number of poor in the streets, asked the Consell de Cent, the municipal administration, to found an asylum to hold them. Since then, the buildings of the house have been built up, reformed and demolished over the course of four centuries. In 1852, a Casa de Maternitat i Expòsits (House of Maternity and Orphans) was situated in the very same enclosure, occupying the east wing on Ramelleres Street.

From the beginning, the Casa de Misericòrdia was devoted to assisting the poor. The majority of these were brought in as a result of public announcements organized by the Consell de Cent. Once there, they were subsumed to a strict discipline and work. But not all of them were obligated, there were people that also went voluntarily to the house because they could find a roof and a plate of food there.
The hospice, with the entry on Vicenç Martorell square, formed part of the Casa de la Misericòrdia and the nuns of the Charity took care of it. When, in 1852, the Casa de Maternitat i Expòsits was inaugurated, they assisted the abandoned children of the city. The "expòsits" (orphans) were the children whose parents were unknown and who, until 1870, did not have last names. The anonymous abandonment of children was allowed through the installation of a drop-off box for orphans (torn d'orfes) that was used since the mid-nineteenth century and until 1931. During its 50 years of functioning, this house held more than 30,000 children.
Currently, the remains of the drop-off box are still visible in the façade of the building. There are two holes with a covering of wood. The bigger one corresponds to the 'box' for orphans: somebody who wanted to leave a baby without being seen could lay the newborn in the outside part and then rotate it so as to introduce the child into the hospice. The other hole was used as an alms box that the nuns collected and used to fund the house.
The Casa de la Misericòrdia was formed by an ensemble of buildings of convents that until the XIX century had grown up without a well-established urbanistic plan. During the last years, it has been substantially remodeled and, despite that, the enclosure preserves to a great degree the old convents (buildings in Elisabets, Àngels and Montalegre streets and that of Colegio de Sant Guillem d'Aquitània).