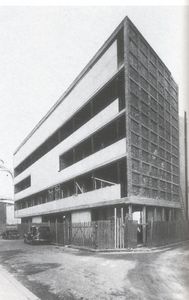 Source: The Antituberculosis dispensary on Torras i Amat Street during its contruction. Source: Museu d’His

Designed as the Central Antituberculosis Dispensary of Barcelona, this was one of the few buildings of modern architecture in the city center in the first third of the XXth century. Its building was the work of the architects Josep Lluís Sert, Joan Baptista Subirana and Josep Torres Clavé, all of whom were members of the GATCPAC (Group of Catalan Architects and Technicians for the Progress of Contemporary Architecture). The work was finished in 1938: with a floor in the form of an L, using new materials and following hygienic criteria, the building proposed a clearly groundbreaking plan. The dispensary, restored in 1993, currently holds the Centre d'Atenció Primària Doctor Lluís Sayè, in honor of its main promoter.

On April 29th, 1937, the Central Antituberculosis Dispensary of Barcelona was officially inaugurated in Torras i Amat Street, with the presence, among other people, of the then president of the Generalitat de Catalunya, Francesc Macià, and the doctor Fèlix Martí Ibáñez. The work represented the culmination of the fight against tuberculosis in the city and in Catalonia since the beginning of the XXth century. This disease emerged during the XIXth century –in the last decades- amidst the 'new' industrial society that saw harder living conditions in the city.
The main promoter of the dispensary was Dr. Lluís Sayé, a physician devoted to the study and treatment of tuberculosis. In 1918, the Mancomunitat de Catalunya (Autonomous Government of Catalunya) requested the address of the his "anti-tuberculosis campaign". To that end, Sayé created the Antituberculosis Service of the Mancomunitat, in the quarter of Poble Sec (1921), on Radas Street, to counteract the high mortality rate in the city. The new Dispensary of 1930s, equiped with X-Rays, Calmette vaccinations and a system of indexing medical records, was a continuation of his work, although Sayé was exiled before he could see the new installacions inaugurated.
The dispensary was not a place of confinement for patients affected by tuberculosis, but it offered treatment and information about the disease and the hygienic measures to follow. Although tuberculosis was soon linked to misery and unhealthiness, the antituberculosis campaigns were more focused on the biological agent of the disease –the Koch bacilus- than on improving the living conditions of the working classes. As stated by Sayé "poverty, on its own, did not create tuberculosis, (...): it is the infection that is the decisive factor". And with this, the disease was also de-politicized.