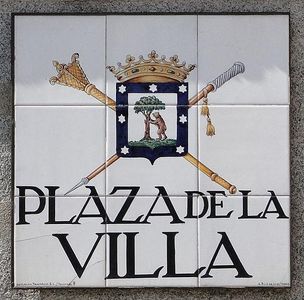 The plaza de la Villa is an urban square in central Madrid, Spain. The square, bordering the Calle Mayor, houses some of the oldest buildings still around in the city.

It was known as "Plaza de San Salvador" in ancient times, as it was located near the Church of San Salvador, in whose atrium the primitive municipal council convened . In 1463 Henry IV of Castile granted a market day in the square on Tuesdays. The Casa de los Lujanes , dated from the 15th-century, is the oldest civil building in Madrid. The tradition states the tower was the location where Francis I of France was held captive after his capture in the 1525 Battle of Pavia.