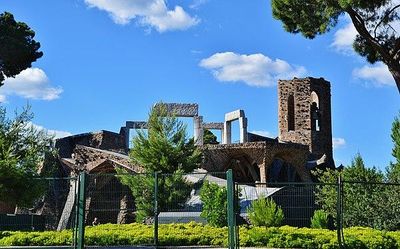 The Church of Colònia Güell is an unfinished work by Antoni Gaudí. It was built as a place of worship for the people on a hillside in a manufacturing suburb in Santa Coloma de Cervelló, near Barcelona . Colònia Güell was the brainchild of Count Eusebi de Güell; who enlisted the help of architect Antoni Gaudí in 1898. However, work was not started until 1908, 10 years after commission. The plan for the building consisted of constructing two naves, an upper and a lower, two towers, and one forty-meter-high central dome. In 1914, the Güell family halted construction due to the death of Count Güell. At the time, the lower nave was almost complete so between the years of 1915 and 1917, it was completed and readied for use.


The Church is one of the seven properties Gaudí built near Barcelona that are Unesco World Heritage Sites. Collectively, these sites are known as the Works of Antoni Gaudí, and show his, "exceptional creative contribution to the development of architecture and building technology in the late 19th and early 20th centuries."